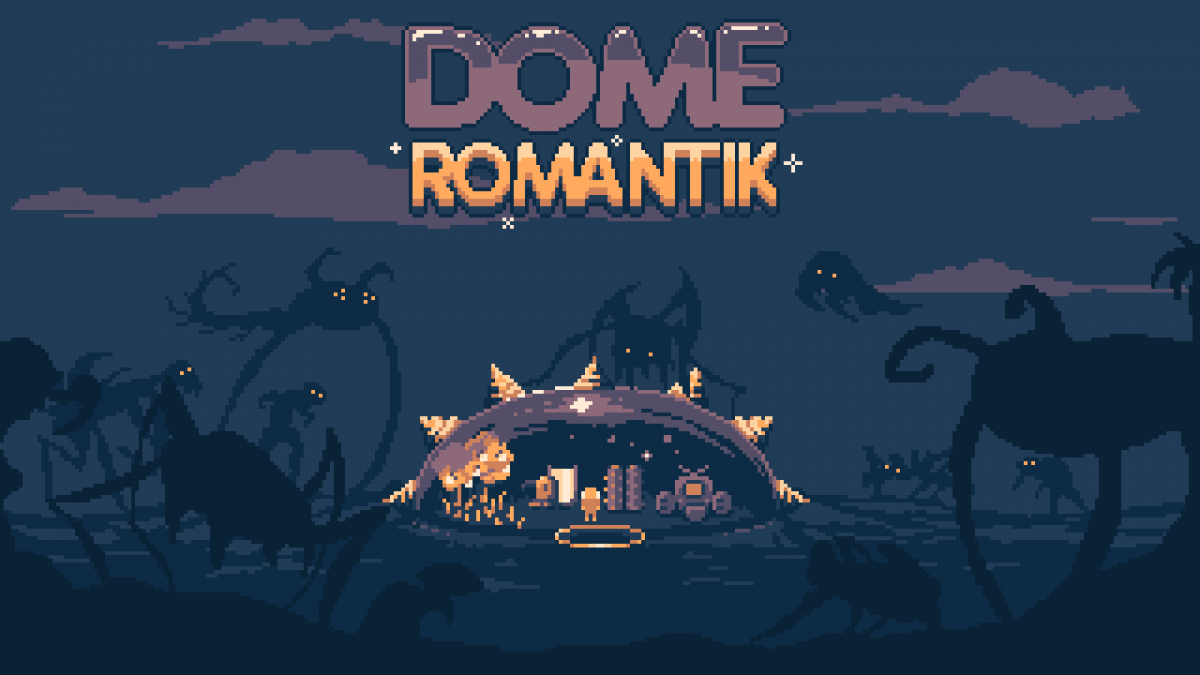 Together with my wife Anne (who does all the sprites) i joined Ludum Dare a tenth time for LD48. We wanted to make a simple game that is polished and appealing, instead of something very experimental. We moved between both ends in the past, but we were so satisfied with how our LD46 Blackbird turned out (where we had the same “simple and polished” strategy), that we wanted to try it again. Back then it was out of necessity - we have our infant daughter at home whose care took a lot out of the day back then. Luckily, my mother was able to visit us this time to care for her, giving us more time to work.

Out we came with Dome Romantik, which is a small mining game where you mine resources and bring them back to your dome. There, you invest it into powerful upgrades and try to defend against the wave of monsters that arrives about every minute. Design wise, the focus was on smooth gameplay, upgrades that feel intense and useful as well as the goal conflict between mining and defending. This is all displayed in a minimalist, moody pixel art view of 320x180 pixels.

Dome Romantik was a real surprise hit to us. On itch alone about 7.500 people played it. As is tradition, the web version also got “pirated” by some sites, so the player numbers are actually a bit higher. We ranked place 9 overall (despite having a high amount of ratings, which seems to harm the score slightly) which is our highest ever. So, let’s see first what went wrong here!

Many games don’t quite make it clear what the end goal is. Having it written in the games description or start screen is not enough - the players will forget, or at least some of them. I fell into this trap too - it’s not like i had time left to do it, but i would have prioritized it, if i had known the consequences. 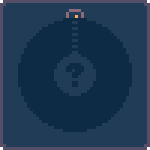 In Dome Romantiks case, i consider it especially harmful. The game is balanced to provide 10 or fewer minutes of fun, where you mine and most of the upgrades. When you get the last ones, the game becomes very easy - at that point you are supposed to drill down into the core of the planet and see the end screen. Quite some players didn’t do that, but kept on playing, eventually getting bored, wishing for more upgrades, weaker final upgrades, or a proper ending. That was a missed opportunity. I think this can only reliably “delivered” to the player, if it appears ingame at the right time, and not through a text or panel at the start or pause menu. Did you find an elegant way to incorporate the push into an actual end in your game?

I opted for a old school sound scape and tried to find fitting, free music for this. I spent maybe 2 hours doing that, but didn’t find anything that would fit the very low energy mood of the game. I put in some ambience noise, and that was it. After the rating phase ended, the great Cameron Paxton made some amazing tracks that really elevate the mood. Having him on board would have been great, both saving time and improving the game a lot - music is so powerful.

I lost about 6 hours (15% of the available time) due to having external meetings for work and for the “long night of computer games”, a stream event where we were invited with our previous game-jam-entry-turned-full-game [Of Mice and Moggies](https://store.steampowered.com/app/1409180/Of_Mice_and_Moggies/). I enjoyed being there, but i lost quite some time which led to the cutting of a dearly missed element: the flying monster. Originally, we had the idea of adding two walking and two flying monsters, to attack the dome. We ended up with only one walking monster in total, which made the combat a bit simplistic. Many people suggested a flying monster, which was right on track. But it came down to having the flying monster or having sound, so the decision was clear for me.

I exported Dome Romantik natively for all 3 major OS and for the browser. The browser had a ton of issues. First of all, the audio had a really irritating crackling to it. Many small texts became unreadable when playing in a lower resolution than 1920x1080. I tried to fix that, but accidentally broke the tutorial panels (they were out of screen, faulty position calculation), which left some players wondering what to do. All in all, this did not deliver the best version of the game to the players. I think it’s no coincidence, that jam winners often only have a downloadable version. Still, web reaches so many more people, and after all we’re joining Ludum Dare to have people play our games and get feedback, not to have the highest score.

If you use Godot and got crackling sound: Export with "Threads" enabled. It won't run on some browsers in itch, but i think it's a good trade off.

No one dedicated to sounds

I don’t think i need to tell you how important sounds are. They take time, skill and dedication to get right. Like usual, we had no one to care for sounds, so i had to do it on top of game design, programming, playtesting, directing the art and keeping up with the community. I try to do my best with free sounds i can find, but it always takes about 6 hours, which i dearly miss on other parts (like communicating the end goal, or creating flying monsters).

Making a good jam game with only 2 people is so hard, that i have immense respect for anyone making a proper game alone here. Wow, you folks!

Anne made a little sketch early up with about 320x180 pixels. I was very sceptical of that and i often pushed for higher resolutions in the past. This time i fully trusted her with that as she seemed confident about it, but also because she has grown so much as a pixel artist the last year. The first concept i dismissed and asked Anne to make some different types and colors. She quickly came up with something we both immediately liked, and it stuck and ultimately was very well received. 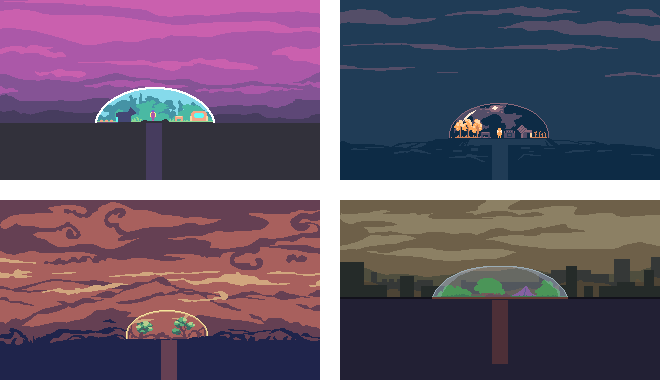 initial sketch on the bottom right

As you can see, the "winner" got iterated upon, with a pretty nice feel of depth to the dome.

An additional benefit of having such a low resolution and minimalist style was, that those sprites are made and animated rather quickly. The monsters are shapes of a single color with eyes, for example.

Honestly, i was so surprised when i didn’t get a ton of feedback in the sense of “oh, another mining game, and it brings nothing new to the table, great!”. We purposefully went for something we thought of as pretty obvious (and i still think it is), and not something hugely innovative or intricate. But we knew we wanted to make it really well playable, and that worked out well. Maybe we’ll do something more experimental next time, but i learned something i was always a bit scared of: It’s okay to make something obvious, as long as it’s fun. You don’t have to be clever with it.

That was a bit freeing, as i always discarded the obvious game ideas even if i had nothing better in my mind. I wonder if you disagree with that, or if you had instances the same thing happened to you.

This is one of the most important and most difficult parts of making a jam game: how do you teach the game to your players in a way

Overall that wen’t pretty well for Dome Romantik. This goes way beyond having explanation texts. I made a little post about that some time ago, check that out if it interests you :)

Of course it wasn’t perfect. What haunts me is one thing: In the game you can collect water, to turn into fruits that let you fly faster. I intended this as an early game changer that adds fun and complexity. But it seems, most people did not understand at all what is supposed to happen there and took the trees as decoration. I simply did not explain it properly and somehow thought, the players would notice it and try it out of curiosity. Turns out, when you are under time pressure your curiosity shrinks a lot.

I spent more time ever before playtesting the game, making dozens of runs on monday. I think that showed in balancing, power feeling of upgrades and appropriate game length. I also found out about a few things i had to simplify, which i described in the Tutorialization Post

It was also the one if the first times Anne actually had fun playing on of our games :D Ain't that strange? It might feel strange, but actually and seriously playing your game will probably be better for it than adding more features and content. I rarely did this in the past jams, because i never felt i had the time for it. But now i'd rather cut content and play more.

Ok, that’s it for now.
We are happy to say we will continue to develop Dome Romantik into a full game (but with a name change, most likely), where you go on runs across different planets. If you want to keep close to development, please join our Discord. I’m actively seeking your feedback and value it a lot.

new worlds for the full game

We also set up a Steam Page for it, i’d love to get your feedback on it (Trailer will follow!). We’ll also release on itch, love that platform.